“The stakes in this election could not be higher: a vote for Jon Ossoff is a vote to hand power to Chuck Schumer and the radical Democrats in Washington,” said Perdue campaign manager Ben Fry. “Georgians won’t let that happen.”

Under Georgia’s unusual rules, a Senate candidate needs to hit 50% of the vote to avoid a runoff. But Loeffler, who was appointed late last year to fill the seat of retiring Sen. Johnny Isakson, faced multiple candidates in her race, including Warnock and GOP Rep. Doug Collins, depriving her of enough votes to win outright. CNN has projected that race will head to a runoff and has not yet made a projection in the Perdue race, which featured three candidates. But Ossoff looks to be pulling Perdue below the 50% threshold, making it almost certain that the Democrat and Republican will also meet in a January 5 election.

At stake is more than control of the Senate. Although CNN has not yet made projections in every Senate race, Republicans are expected to hold a 50-48 advantage heading into the runoffs, and if Democrats sweep the Peach State, the Senate will be evenly split. If Biden is President, a Vice President Kamala Harris would break tied votes in the chamber.

But if Senate Majority Leader Mitch McConnell continues to lead the Senate, a President Biden would have to drastically shift his goals for the next four years. He would struggle to pass greater financial aid and unemployment insurance during the pandemic. It would be near impossible for him to sign laws to combat climate change, or create a public health insurance option for Americans to buy. McConnell would be able to delay or block nominations for liberal judges.

That argument could be beneficial to the GOP.

Former Georgia GOP Rep. Jack Kingston told CNN that that prospect would be good for the Loeffler and Perdue campaigns. Kingston said that keeping the Senate in Republican control “would be a motivator” for Peach State voters.

Georgia hasn’t elected a Democratic senator in 20 years. But Democrats have new reasons for optimism, given Biden’s increasingly strong performance in the state, 800,000 new voters registered in the last two years and the rapidly diversifying Atlanta suburbs. And unlike in November, Trump won’t be on the ticket, potentially reducing GOP turnout.

But the fates of Perdue and Loeffler will still be tied to Trump. Both senators have come to his defense as he rails against the democratic process, baselessly charging that the election has been rigged against him. 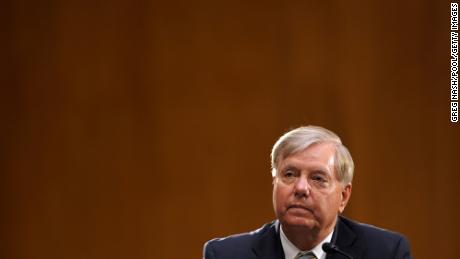 While a handful of Republican officials, like Utah Sen. Mitt Romney, have said that Trump’s false claims damage American democracy, Loeffler has urged her supporters to join her in donating to Trump’s campaign for its legal challenges, while Perdue has maintained that Trump will be reelected if “every lawful vote cast” is “counted, once.”

The messy aftermath of Tuesday’s election could cause voters to revolt — and damage Republican candidates.

“Without Donald Trump on the ballot, I don’t know (if) he’s going to give one crap about helping turnout his base in Georgia,” said Connecticut Democratic Sen. Chris Murphy. “Donald Trump could be doing some just batshit crazy things on or around January 5 that could mobilize the same constituency that came out for Biden on Tuesday.”

Democrats are already counseling their members to be cautious in the next two months. On
a caucus-wide call Thursday, Speaker Nancy Pelosi told her members about the importance of the two races, as some moderate Democrats spoke out and raised concerns about messaging moving too far to the left.

The campaigns during the lame-duck session of Congress could put new pressure on lawmakers to find consensus around a stimulus package, as voters in Georgia and around the country are eager for relief from Washington. But if negotiations stall again, Democrats are prepared to blame McConnell and make the case that Georgia voters could effectively end his reign atop the Senate.

“If we are going to repair the damage of the Trump years, if we are going to pass legislation that is really going to improve the lives of average Americans, we can’t live under the shadow of a Mitch McConnell veto,” Senate Minority Whip Dick Durbin told CNN. “Basically, to America: You’ve elected a President now. Now give him a chance to govern. If Mitch McConnell is looming over every decision with a big ‘no’ button, it makes it very difficult.”

Ellen Foster, Ossoff’s campaign manager, said on Friday that she welcomes the looming conversation over control of the Senate, saying “people really don’t believe that Republicans in the federal government, from Trump to McConnell, have done enough in this pandemic to help people.”

Republicans are already portraying Ossoff and Warnock as pawns of Schumer. They have begun reaching out to their donors, asking for their help to “finish the job” in the Senate, said one Republican strategist involved in Senate races.

Political groups have already spent over $173 million on the Georgia Senate races, 58% of which was by Republicans, according to Kantar’s Campaign Media Analysis Group.

“It’s going to be an epic battle,” the strategist said of the Georgia contests. “It’s for all the marbles, frankly.”

Stanley Hubbard, a billionaire media magnate in Minnesota, has donated more than $600,000 to Republican party committees and candidates in the 2020 election cycle. He said he’s prepared to give more to preserve a Republican majority in the Senate, if for no other reason than to block any effort by Democrats to add seats and liberal justices to the Supreme Court.

The notion of an expanded high court “scares the heck out of me,” Hubbard told CNN on Friday. “It should scare every American in my opinion.”

Officials from Americans for Prosperity Action, a political arm of the network affiliated with Kansas billionaire Charles Koch, said they will throw their weight behind Perdue. The group said its activists knocked on hundreds of thousands of doors in the runup to Election Day to reach swing voters in Georgia, and it sent out more than 11 million pieces of direct mail.

It is not engaged in the election between Warnock and Loeffler, who has drawn on her own fortune to fund the race. Loeffler spent $23 million of her own money in the contest through October 14, according to Federal Election Commission filings.

Steve Phillips, a longtime Democratic donor and the founder of Democracy in Color, said the “entire Democratic ecosystem is going to be highly, highly motivated to invest large sums of money in those Senate races.”

“I expect tens of millions on the Democratic side, flowing fast,” he said.

The Senate Majority PAC, the main super PAC aligned with Schumer, is planning to help both Warnock and Ossoff, said president J.B. Poersch in a statement Friday. The super PAC and its affiliated groups spent nearly $47 million on TV, radio and digital ads against Perdue through Election Day.

“The Georgia Republican ticket is made up of a pair of corrupt, out-of-touch politicians who profited off of the pandemic and will stop at nothing to take away Georgians’ health care,” Poersch said.

Warnock is already up with an ad warning that Loeffler wants to get rid of health care during the pandemic and is “gonna try and scare you with lies about me.” The ad’s narrator warns of negative ads claiming Warnock eats pizza with a fork and knife, once stepped on a crack in the sidewalk and “even hates puppies,” which he disputes.

Loeffler responded on Twitter that she would attack him over “calling police officers gangsters, thugs, and bullies,” pointing to his comments after Michael Brown’s 2015 killing by a police officer in Ferguson, Missouri. (Warnock has since said that he has “deep respect” for law enforcement but wants the country to have “equal protection under the law.”)

“We aren’t going to talk about pizza and puppies,” said Loeffler. “Everyone loves those, including me!”

While Ossoff has portrayed the Senate race as a contest between competence and chaos, Perdue has branded it as a choice between freedom and socialism. But the race has also frequently shifted into a series of character attacks.

Perdue, a 70-year-old former Fortune 500 CEO, has dismissed Ossoff, a 33-year-old media executive, as not knowing how to create or keep a job. Last month, Ossoff told CNN that
Perdue’s butchering of Harris’ name at a campaign rally was “unquestionably” racist.

Ossoff has aired television ads attacking Perdue for downplaying the threat of the pandemic, and for trading stocks after receiving a Senate briefing on the virus, purchasing stocks in a pharmaceutical company and another company that produced personal protective equipment, while selling stock in a casino company. Perdue and the Senate Leadership Fund, a McConnell-aligned super PAC, have countered with ads saying that the senator was “exonerated” by independent investigations.

At their recent debate, Ossoff called the senator a “crook” who was “fending off multiple federal investigations for insider trading” while attacking “the health of the people” he represents. Perdue snapped back that the Democrat had worked for “the mouthpiece of terrorism and Communist China” — claims Ossoff called “ridiculous.”

At an outdoor rally in Atlanta on Friday, Ossoff said that Democrats now have the “momentum,” even though he received about 100,000 fewer votes than Perdue.

“Change has come to Georgia,” Ossoff said. “And retirement is coming for Senator David Perdue.”