Week 6 in the NFL brought what may be one of the cleanest weeks of action to begin the season. With no catastrophic injuries affecting teams for the remainder of the year, the play on the field seemed to settle in as the more well-known players performed up to par. With big weeks from Derrick Henry and Julio Jones, along with others, it felt like all was right with the world. Now the question will be can they keep it up, or will we go back to the wild and wacky guessing game that is fantasy football?

Now that we are six weeks into the NFL season the crystal ball is becoming more clear. The cream always rises to the top and talent always finds a way. Which is what we are seeing if you look at positional rankings over the first six weeks. Players like Alvin Kamara and DeAndre Hopkins find themselves in their rightful places. But of course, there are outliers like Josh Allen and Robby Anderson taking full advantage of plus matchups to begin the season and it reflects in their rankings. The guessing game of the early parts of the fantasy season is out the window now and looking at matchups breeds success. Knowing which players are set up for big games while knowing which players are in for tough days and require benching is key for fantasy managers. With several weeks of data at our disposal, sifting through to set optimal lineups should be fairly easy.

Knowing positive and negative matchups is vitally important to a manager’s success. That is what we provide for you here with the Woos and Boos of Week 7. I take a look at those under the radar plays that should be considered starting options for the week, while also pointing out the household names that could be in for disappointing weeks based on tough matchups.

The beneficiary of “Who plays the Falcons?” this week will be Stafford. He has been an up-and-down performer to begin the season and is valued as a QB2 most weeks. But the offense has been without a fully healthy Kenny Golladay and the passing offense was struggling without him. Now with Golladay back, the Lions will be facing the worst defense in fantasy in points allowed to opposing quarterbacks (29.9 FPPG). The defense has continued to play horribly, allowing at least three touchdowns in each game except one (Week 5). Look for that to continue this week as the Stafford/Golladay connection is primed for a big day. 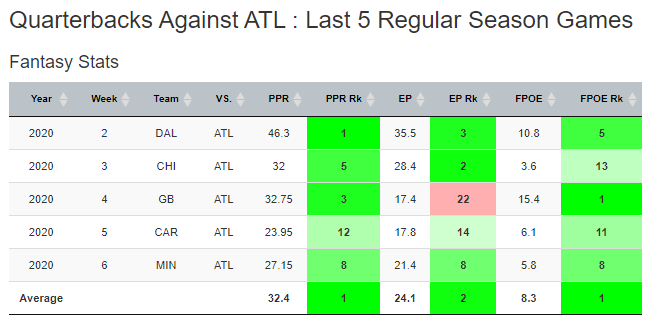 I’m usually not one to promote playing David Johnson as I’m not very high on him as a fantasy player. But coming off a solid RB1 week against the Titans he is set up for success yet again in Week 7. He will be facing a Packers Defense that next to last in points allowed to the position (28.0 FPPG) and allows 6.8 FP over the average in scoring. They have had back-to-back weeks allowing multiple touchdowns to opposing RBs and we all saw what Ronald Jones did to this defense. Now the multi-faceted Johnson will get his turn and could turn in yet another RB1 scoring week for fantasy managers.

Higgins continues to shine each week as the targets have been consistent since Week 3. He seems to be a big play waiting to happen as he is currently top-20 in air yards (525) and deep targets (9). This week he will look to take advantage of a Browns Defense that is near the bottom in points allowed to the position (30.5 FPPG). With the Bengals having plenty of weapons to cover on defense, Higgins should be able to see single coverage all day and I would count on another score in this matchup. I view him as a WR3 going into the week with WR2 upside and should be starting in all lineups.

Thomas re-emerged from his vanishing act in Week 6 as he found the end-zone for the first time since Week 1. There could be some sort of rapport between him and Kyle Allen as Thomas recorded a season-high 42 yards on four targets, finishing as TE9 on the week. This week he will look to take advantage of the porous Cowboys Defense, which is currently allowing 9.5 FPPG to the position. Thomas is the perfect candidate to start for managers that like to stream the position.

My how the mighty have fallen. What used to be a perennial top-5 QB, Brees has been able to muster only two QB1 finishes on the season. He ranks 20th in passing yards (1,331) and 28th in air yards (1,010), showing that there is an unwillingness to take the shot down the field for the big play. This week could yet again be a struggle facing a Panthers Defense that is one of the best in the league in points allowed to the QB (14.6 FPPG). With Michael Thomas again in question for this offense in Week 7, starting Brees could be a risky proposition for fantasy managers.

There are multiple factors here in play as I look at Edwards-Helaire for Week 7. Most fantasy managers will be starting him, or in a position to have to start him. But with Le’Veon Bell set to make his team debut, and facing a very stout Broncos run defense (12.1 FPPG, best in the league), Edwards-Helaire could struggle to find consistency. Sure, he recorded an RB1 finish a week ago (his first since Week 1) and is currently second in rushing yards (505). But he ranks just 16th in yards-per-carry (4.6) and 14th in evaded tackles (25). Look for the sure-tackling Broncos to bring him down early, eliminating his chances to get to the second level. He still will be played by fantasy managers in Week 7, but be sure to temper expectations.

Robinson, bad quarterback play aside, remains the WR9 on the season. He requires plenty of targets to do his damage in matchups as his ability to get into the end-zone has just not been there (two TDs on the season). He is fourth in the league in receptions (40), third in air yards (674) but just 23rd in scoring. Expecting a quality start from him against a tough Rams secondary (16.3 FPPG, best in fantasy) will be a bit much to ask. He is another player that fantasy managers will be in a position to have to play, but the likelihood that he scores well enough to help you win will be minimal.

Higbee has been by and large a disappointment for fantasy managers to begin the 2020 season. Aside from his three-score game in Week 2, he has not found the end-zone. The other statistics are not kind to him either. He ranks 21st in targets (21), 26th in routes ran (105), and 25th in red-zone targets (3). All showing a player that is inconsistently used in an offense that ranks 29th in the league in pass plays per game. This week he faces a tough road yet again as the Rams face a Bears Defense that allows just 7.8 FPPG to opposing TEs. With the poor play to begin the season, Higbee could be a player that most fantasy managers should be benching this week and use the waiver wire to stream a better matchup.

Be sure to also check out all of our other daily
fantasy football articles and analysis to help you set those winning lineups, including this new RotoBaller YouTube video: